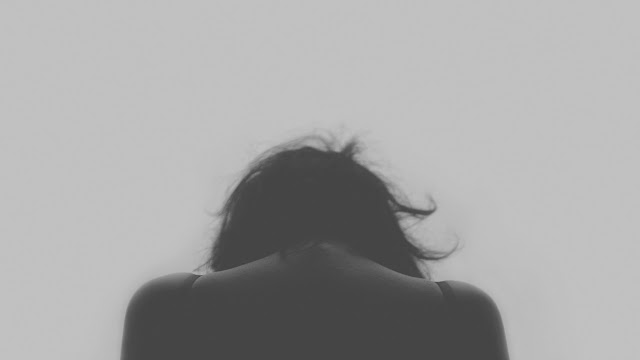 We live in a society that grieves its losses.  Parents die, and we mourn, and rightly so.  Loved ones leave us too soon, but would it ever be long enough?   But human death is not the only loss that we mourn.  We mourn the death of relationships, the death of childhood innocence, the loss of a beloved job, or the loss of a faithful and loving family pet.  Whatever the loss, we take our time getting through it.  We need time to transition to our new normal.  There are stages, and sometimes we don't go through them as gracefully as we would like to think.

In a way, this same process must happen when you face the reality of entering the world of chronic illness.  I apologize for the lateness of this post; it really should have been one of my first, and that seems so obvious now, but I can't go back and change that now.  I can only share the benefit of some painful years of experience and what I have learned from them as a result.

When you start to realize just how sick you are, and that those aches and that fatigue aren't just going to go away with a decent night's sleep or a couple extra naps, it takes a while for the weight of that new state of being to sink in.  You are used to being strong.  You are used to being healthy.  You used to be reliable at least.  Now you're afraid to even plan a quick trip to the store for fear of living with the disappointment of canceling on yourself for the rest of the day.  You are used to living as a healthy person in a healthy person's world, but the truth is, you aren't that person anymore.  In a way, it is very similar to grieving the loss of death.  You mourn the death of the life you once knew.  The life you assumed you would have.  The life you desperately still want, but can't have.  The life your friends and family still have that you feel left out of.

It's not a quick process, and it's certainly not an easy adjustment.  It's long and painful.  It involves a lot of mistakes and forgetting "how things are now."  But it also involves a lot of paying for that forgetting.  When I've tried to explain these rapid changes to some people, particularly those older than me, they often try to find common ground by relating it to the changes they felt as age crept in, but often their good-natured attempts at relating to me feels like a dismissal.  Oh, I know exactly what you mean, only mine is worse... You think you feel pain and fatigue now?  Just wait until you're my age...  You're young, what are you complaining about?  I remember when I could...

Sadly, the people I can relate to the best dismiss me, because I look 30 or 40 years younger.  What they don't understand is that while they had those 30 or 40 years to gradually adjust to their new limitations and make memories, I had maybe 3 or 4 years tops.  It practically hit me before I knew what young adulthood was.  Instead of looking back with longing at my early 20's I'm wondering what they were supposed to feel like.

Mine were full of pain and trying to pretend I could keep up with the rest of the people my age.  Mine involved a lot of fighting with depression and anxiety wishing I could feel as carefree as many of my friends looked.  Mine were heavy.  I don't say this to complain. You can find an earlier post all about the idea that Fibro stole my 20's...

What I am trying to communicate is that losing good health is a loss that is heavy and must be grieved in order to process your new normal.  Some people try to live in denial as if they are still healthy, and they run themselves and their families into the ground trying to keep themselves alive and functioning, because they won't admit they are sick.  Others get angry and will not find joy in the suffering, because this is not the road they felt entitled to.  Still more try to bargain their way into pseudo-health so they can pose as healthy-ish.

See what I'm getting at here?  There are people in all sorts of "stages of grief" about their conditions.  The point is not to condemn those who are struggling their way through it, because I have been in all of those places and they all take time.  The goal is simply to eventually come out to the place of acceptance where I stop fighting against who I am and how I am made and stand open-handed before God accepting His will for my life.  Does this mean I stop trying to be as healthy as I can?  No.  Does this mean I stop trying to be as active as I can without being self-destructive?  No.  Does this mean  make no plans because the disease will just force me to cancel anyway?  No.  This means my emotional and spiritual well-being do not depend on God healing me at some point and coming down to apologize for screwing up in how He designed the course of my life.

I know this sounds a little over the top, but there have been points when I felt like that was what it would take to make me ever ok again.  I am not there now, and I thank God for bringing me out of it.  It's easy to try to either rush through the process or get bogged down somewhere along the way.  Here's a list of a few observations I've made from my own journey through this.

1. There's a fine line between encouraging someone to keep working through the process and trying to rush them through your schedule for their grief.  As with death, people grieve at different speeds and in different ways.  Having gone through this myself and watched others, I know from both sides it is incredibly difficult to tell with some people whether they are in a healthy place of the grieving process or whether they are just stuck.  As a rule of thumb, I try to err on the side of being supportive and empathetic rather than assuming they're just being lazy and self-indulgent.  Often if they need a push to keep going, God will find a way to do that without me manufacturing it myself.

2. Don't push someone through one stage if you're going to let them soak in another one.  The example that comes to mind in this is the all-too common example of Christians who seem to have no problem with a chronically ill believer who gets stuck in the denial stage and tries to do too much, because it seems spiritual.  But when that same believer eventually hits the anger stage, or perhaps a really severe bout of depression, they are suddenly expected to snap out of it.  Denial of a serious problem is not more spiritual than trudging through depression as a result of it or being angry about it.  They are natural reactions to traumatic circumstances, and should be viewed as such.

3. Don't try to rush yourself through it.  The previous two points were directed at others, but this one gets a bit more personal.  It can be tempting when you're in the middle of this process to feel a lot of pressure to rush yourself through these reactions, possibly skipping most of them in an attempt to give the "right" answer.  What that mindset is perhaps omitting is that David in the Psalms had no problem expressing his honest responses to traumatic events.  He had times when he was angry at the evil being done to him.  He had many bouts of depression.  It doesn't seem a stretch to say he tried bargaining, and the rest of it too.

The Bible doesn't teach us to stuff our emotions in order to produce Christian robots who always give the textbook answer and feel nothing.  The Bible was written by real people with emotions, for real people with real life events.  As I would say to a woman whose husband just died..."Give yourself time and space to grieve, however that looks for you."  This is something that will change the rest of your life; don't underestimate that.

4. Extend grace to those around you.  As humans we tend to judge and evaluate everything and everyone we come in contact with.  Just this once, it would be great if we could focus intently on treating those around us, particularly those who might be more susceptible to these issues with gentle and compassionate care and grace.  I am not talking about walking on eggshells around each other, but simply about speaking lovingly to each other instead of constantly looking for something wrong in each other.  You don't know how many people you interact with everyday are dealing with loss that they don't even have the words to share with you, but kind words and gentle compassion go a long way towards helping them heal.

5. Be patient.  I can't say this one enough.  Getting diagnosed, trying new medications, switching doctors, getting tested for conditions you've never heard of, these are trying experiences for anyone.  Everyone involved needs to extend as much patience as they possibly can with each other.  There will be hurt feelings, and there will regretted words, but the more patience you show intially the fewer pieces you have to pick up later and put back together.

There's a lot more that I could say on this.  Maybe I'll write another post on it later, but for now this is enough to start the conversation and the thoughts swirling.  As people we somehow think that our losses and our grief are not as bad as others or are embarrassing to share with others, so we try to shoulder them alone, and we end up miserable and isolated.  We weren't meant to handle this type of burden alone.  Scripture tells us about the three-strand cord that isn't easily broken, or the two who are better than one, because when one falls the other can help him up.  It doesn't say the other scolds him for falling.  The person who falls when he's alone, just falls.

Chronic illness is not as flashy as cancer or other potentially terminal conditions, but it still drastically affects the people who face it.  It doesn't usually kill its victims; it just makes them wish they were dead after years of dealing with the symptoms.  As a society, we are largely afraid to face pain head on.  We try to hide it with jokes or nuances.  It's time to do the hard thing.  the brave thing.  It's time to take time to grieve this loss, take the time to cry or journal or take a quiet drive or whatever you need to do, and however long that takes, you should know, you are not alone.  Find someone who will grieve it with you.  Life is too heavy to face this alone.
Posted by K.T. Grey at 12:11 AM
Email ThisBlogThis!Share to TwitterShare to FacebookShare to Pinterest
Labels: awareness, emotional, spiritual